Posted on May 23, 2013 by Age Concern España Website Administration 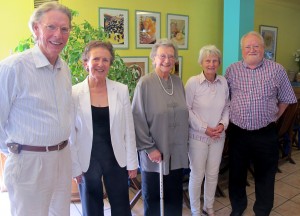 Ten years ago, in 2013, Age Concern, Estepona and Manilva was officially registered as a charity on the Costa-del-Sol, formed to give advice, information and help to older people in the area of all nationalities. Work had started in 1991 to form a group of people who helped to set the charity up and recruit a band of volunteers to work in the community and raise funds. 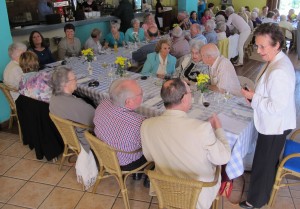 To celebrate this birthday a lunch was held at Pasta Café in Neuva Andalucia and over 50 volunteers for Age Concern attended and enjoyed a fabulous meal and get together. The first President of the charity was Vera Ivers and she was able to make the trip from the UK to attend the meal and say a few words about the formation and work of the organisation, and how it has grown, and is continuing to grow.

In 10 years a shop has been opened as well as a dedicated Drop-In-Centre. She said that when she visits the coast she is so proud of the organisation and what it has achieved. She paid tribute to all of the volunteers, past and present, who have made the charity the success it is. The current President, Eileen Dry, thanked Vera and mentioned the need for more volunteers to be recruited.

All who attended, including the British Vice-Consul, Rosslyn Crotty, agreed that the event was a success and have been enthused by the commitment of all of the volunteers and the Executive Committee. Thanks must go the staff of Pasta Café for the faultless way the food was served and for their overall professionalism.